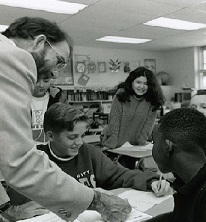 Historically, there has not been a lot of honest assessment about the quality of our school teachers in Maryland. It is too sensitive, too subjective, etc.
But times are changing. Why? Because kids in too many other countries – China comes to mind – are outperforming us by whopping margins. To make meaningful change, we have to do things that are hard. Being honest – brutally honest – is just plain hard.

With that intro, the National Council on Teacher Quality ranked a random sample of three colleges in each state. The lucky Maryland winners were Mount St. Mary’s University, Salisbury University, and the University of Maryland, Baltimore County.

Actually, UMBC comes out looking pretty good, getting a “good” ranking. Mount St. Mary’s? Salisbury? Not so well. They were ranked “poor” in training their teachers.

Honesty is tough. This report is part of a much larger study that most colleges renounced even before the first report came out. No one wants to be judged and we don’t want to judge. One byproduct is that it indirectly maligns the good teachers that come out of these schools. But if you think these schools and principals and school officials who hire teachers are not paying attention to this report, I think you are kidding yourself.

The Baltimore Sun publishes this story, using a positive spin with the title “UMBC gets high marks for student teacher training programs.” Potential headlines such as “Don’t let your kid get taught by someone from Mount Saint Mary’s or Salisbury” or “Bad teacher alert” were apparently rejected.

I think most people would say that UMBC is a better school – statistically speaking – than Mount Saint Mary’s or Salisbury. (If you dispute this, you or your kid graduated from there.) That’s no knock by the way on either school. Steve Bisciotti and Frank Perdue graduated from Salisbury and Mount Saint Mary’s produced a number of smart people (that, admittedly, I have never heard of).

But “better school” does not mean it produces better teachers. William and Mary College, a great school under almost any definition, ranked “poor” in the study. Meanwhile, Bridgewater College which is down the road from William and Mary in Charlottesville, Va. received a “model” ranking. I’ve never heard of Bridgewater College. (In fact, it sounds made up to me.) But, apparently, they are putting out well trained teachers by the bushel load.

It is worth noting that Salisbury’s provost takes exception – in an email to the Baltimore Sun – to the methodology of the study. Okay, fair enough. But can you tell us what the exceptions are? These guys spent years on this study. They could have completely mucked it up and put out an awful study? Absolutely. But I think just writing the Baltimore Sun an email saying, “The methodology was all wrong” is probably not intellectually honest.