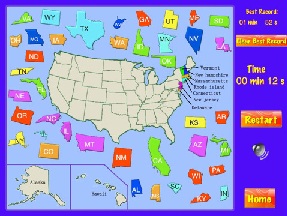 One of the great, great uses of the iPad is teaching geography. My kids know more about geography than you do. Yes you. And the iPad is the reason. I’m going to write about a lot of high tech geography games.

But let’s start with United States Puzzle Map, a decidedly low tech game. It has annoying music (after five minutes) and very basic graphics. The designer, Jenny Sun, does not seem to believe that the second name in a state should be capitalized. These are not good things.

But I’m telling you, in terms of teaching your kids the United States (we used the same one for Europe too), it is a great game. I can’t even fully explain why it is superior to a lot of better looking games. It is offered in 8 different languages and has a little trivia game that helps kids nail state shapes.

I love this game and the other iPad geography games because it gives kids a real context as to where the world is and how it is put together. When my four year old daughter hears there is an earthquake in Japan, she has some sense of where that is. Not a great sense, but she has some idea of how it fits in the world and where it is in comparison to us.